Pocket Workshop: Essays on Living as a Writer 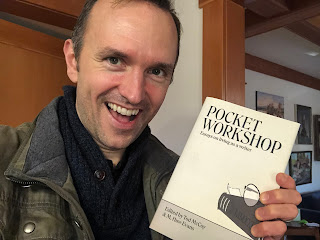 Today, I opened a package containing a beautiful hardcover proof copy of the book I've been working on since March of 2020. It will launch one month from today. I won't make comparisons to babies, but this has been a huge thing in my life, and I couldn't be prouder or happier.
I'm immensely grateful to all of the authors who contributed essays, and to Tod for inviting me to join him in editing the anthology.
If you want to learn more about the book (or pre-order a copy), follow this link. The rest of this post is about my experience with it.
I wrote the following foreword for the book three months ago... and then I thought better of it and decided to write a foreword for the book that was more about the book (and less about me)—something to help introduce readers to what they held in their hands. This first stab at a foreword felt more like a blog post... so... that's what it'll be.

This book’s table of contents reads like an index to the last nine years of my life.
In 2012, I attended Clarion West, where I was told—among many things—that I might not be a writer, that I might become an editor instead.
Months earlier, at a small SF con called Potlatch, I met Tod McCoy. Later I would remember him for two things: 1) gleefully bidding up—and winning—a signed first edition at the benefit auction (Was it a Zelazny or a Delany?) and 2) going out of his way to welcome newcomers to the Seattle SF scene. Oh, and a third: he mentioned that he published books. (Also that weekend, I met Pocket Workshop’s cover artist, Cory Skerry, who likened novel writing to juggling, and who would soon be among my Clarion West cohort.)
Rewind another six months: Fall of 2011 saw me taking a one-day workshop from Nancy Kress and online classes from Cat Rambo. Nancy taught me about scenes and how (I’d been failing) to write them. Cat taught me everything. (And she told me that choosing not to write was perfectly valid… but that in her home, writers just f**king write.)
Jump forward again to Clarion West 2012—the summer workshop. It was finally happening. The long hours and late nights, the shared genius (real or imagined), the terror and delight at every written—every critiqued—story, the voices of instructors (which would continue speaking in my head thereafter (those of Stephen Graham Jones and Connie Willis included), and the emergence of a new family—a cohort of writers who know me better than anyone ought (two of their voices speak from these pages).
After the workshop, I returned for more, first as an assistant, then as workshop administrator, joys of which position included working with Neile Graham, witnessing students’ growth, and forging friendships with instructors (many of Pocket Workshop’s authors). I now serve on Clarion West’s board, and while I’ve loved the organization since first contact, its ongoing dedication to nurturing and promoting neglected, marginalized, and underheard voices, and to engaging with the social and literary interests of our community, make me ever happier to be counted among its number. Especially now, in the hate-drenched apocalyptic chaos of 2020 (and I’m writing this three months shy of year’s end).
Today I finished reading the 1997 Elizabeth Hand novel Glimmering. Global pandemic, environmental horror, social collapse: it felt too familiar—another morning’s trawl through Guardian headlines. I tend toward depression. It’s an effort to keep my brain from spiraling, and this year has put anti-spiraling tools to the test. Editing Pocket Workshop—reading these essays and corresponding with their authors, guzzling at the firehose of their wisdom—has helped. For me, it is one of a handful of bright foci scattered across darkness—another shining point in a vibrant constellation of hope, of future.
It’s a book for writers, yes. But also, it’s a book for people who live… now. And tomorrow.

Here's the Table of Contents: