The Next Big Thing

This is my response to a "blog survey" about my Work in Progress. I was tagged for this by Carlie. Others of my Clarion West 2012 cohort who have been tagged on this include Alyc, Cory, Helen, Kim, Blythe, and Georgina.


1. What is the title of your Work in Progress?


2. Where did the idea come from for the book?

As faithful readers will no doubt recall, I sometimes post my daily timed writing exercises on this blog. Some of them I later develop into longer pieces. Most of them are responses to lines pulled randomly from books around the house—lines taken completely out of context.

Back in February, I wrote on a prompt from one of H.G. Wells' late (and lesser-known) works, The Happy Turning. Later, at the Clarion West Writers Workshop, I developed it into a short story. I had so much fun writing it, and received so many intriguing suggestions from my colleagues and the instructor of the week (Stephen Graham Jones), that I began to think of it as the beginning of a novel.

Today, as I was going through my timed writing exercises, looking for the one mentioned above, I found several others, with related themes (here, here, and here). It seems that my mind has been delving into (and back out of) the grave rather frequently.


3. What genre does your book fall under?

Hmmmm... difficult question. At the risk of giving too much away, I think of it as paranormal horror, disguised as a light-hearted science-fiction adventure.


4. Which actors would you choose to play your characters in a movie rendition?

I've never been one to generate a clear picture of what characters look like in books that I'm reading. The same goes for characters that I write. When it matters, for any story reason, I'll describe elements of their appearance, but when it comes down to it, I really don't care what faces my characters have in the minds of readers. I want readers to supply the face that works for them. I am, therefore, sorely tempted to boycott this question altogether.

However, to engage the spirit of the survey, I'll give it a try. But only for two of my characters, and I reserve the right to come back and alter this post later, should the faces of these actors begin to exert too heavy an influence on the natural evolution of my creations.

Ella Ferry, the protagonist, is in her mid-sixties, and is a smart, crusty, wiry, curmudgeon. Life (and a few of life's less savory emissaries) have dealt her a pretty shitty hand, but she manages to get the job done and to sort out whatever (and whoever) needs sorting. My top picks to play her would be Frances McDormand or Sigourney Weaver.

Turner Luce, a sophisticated but rather unpleasant character about whom I shouldn't divulge too much, might be well played by Ralph Fiennes or Clive Owen.


5. What is a one-sentence synopsis of the book?

In the near future, technology that restores deceased persons to life proves to be a blessing for some, a curse for many, and, for a privileged few, one hell of a business opportunity.


6. Will your book be self-published or represented by an agency?

The latter, if I'm lucky. If not... well, we'll just see how desperate I get. I don't particularly like the idea of self-publishing, as I'd rather not have to deal with any aspect of the process besides writing. Agents and publishers play important roles in turning a book into something that people might actually want to read. I'd like my novel to benefit from such expertise.


7. How long did it take you to write the first draft of the manuscript?

Ha ha ha ha. Good one. First draft? Past tense? Ask me again when I've written a first draft and I'll be delighted to tell you.


8. What other books would you compare this story to in your genre?

Um... we may have encountered a problem here. Although I'm sure there's nothing truly original about my novel, I'm at a loss when it comes to comparisons. I read mostly hard SF and literary classics, with a bit of fantasy and modern literary tossed into the mix. Books that feel similar to some of what I'd like to capture in this novel include:
The Angel's Game by Carlos Ruiz Zafon (for dark, creepy, moral ambiguity)
Huckleberry Finn by Mark Twain (for on-the-road--or river--adventure with plenty of humor)
Riders of the Purple Sage by Zane Grey (for tumbleweeds, old-west feel, religious zealotry, and guns-a-blazing)
The Queen of the South by Arturo Perez-Reverte (would-be damsel-in-distress defying expectations to become kick-ass, uber-pragmatic, violent-when-necessary kingpin)
The Man Who Was Thursday by G.K. Chesterton (for secretive organizations, plot reversals, and the-completely-unexpected-seems-inevitable-ness)
Fear and Loathing in Las Vegas by Hunter S. Thompson (for freaked-out, substance-fueled humor, sheer paranoia, and dry, dusty, road-trip-through-the-American-Southwest mystique)


9. Who or what inspired you to write this book?

Part of this is answered above in question 2, but I suppose that some of my underlying interest in the idea of corporeal resurrection stems from growing up with people who believe in a literal resurrection of the dead. This novel is not a commentary on any specific religious beliefs (the mechanisms of resurrection in my story have nothing to do with those suggested by Christian traditions), but tales that I heard as a child, from both the New and Old Testaments of the Christian Bible, may have planted early seeds this project.

That would be the "what" part. As for the "who," most of the credit goes to my Clarion West cohort and Stephen Graham Jones, for giving me such enthusiastic feedback on the short story, and for giving me so many additional ideas about where I might take it.

Also, in that this story features a tough, practical, often abrasive, but ultimately caring woman as the protagonist, it is certainly inspired by many such real-life women who I know or have known.


10. What else about your book might pique the reader's interest?

I will include realistic details about disease, death, and mortal remains—information gleaned from medical training (especially from forensic pathology rotations). It will be set largely in wastelands of the American Southwest, but segments of the story will occur in cities as well. I intend to explore the fuzzy line between incomprehensible technology and old-fashioned magic, and whether the distinction even matters.

Mostly, though, I just want to create something fun—fun to write and fun to read. I've been writing sad stories lately, and I want to see what it feels like to laugh and smile while typing, so if I succeed, readers can expect to be entertained.

By M. Huw Evans No comments:

By way of explanation... 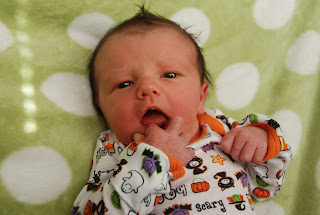 I cannot promise that she will escape mention on this blog henceforth, but I assure you, she will not be allowed to dominate it. Although... I'd probably have a lot more readers if I were to post a daily photo of Eleanor.

Anyway, thanks for indulging my parental pride. I'll try to get back to posting the usual writerly stuff very soon. Cheers!
By M. Huw Evans 1 comment: